Born in Paris in 1836, Jules Cheret became a printer's apprentice at the age of thirteen. In 1866 he set up his own printing shop and soon drew commissions from the theater as well as magazine and book publishers. By 1881 he was successful enough to merge his operation with a larger printer, Chaix, who thereafter produced his work. Cheret soon discovered that the advertising poster required a set of pictorial principles different from the conventional illustrative techniques of the period. He created a new standard for poster design with vibrant color, a dynamic and romantic figure in motion at the center of each poster and a simple background. His colorful, sophisticated designs for the theater and opera influenced the artist Toulouse-Lautrec. Jules Cheret was the founder of the color pictorial poster and was its most prolific artist. Even more importantly, Cheret invented the simple yet effective lithographic process that used just three or four lithographic stones to produce large and colorful posters in every shade of the spectrum. Cheret's posters made an emphatic mark on turn-of-the-century Paris. Charles Hiatt wrote in 1895: "Paris without its Cherets, would be Paris without one of its most pronounced characters with its gaiety diminished. Cheret's posters greet one joyously; they smile at one from the walls of every cafe, arrest one before the windows of every kiosk." Jules Cheret died in 1932. 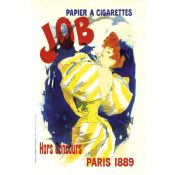 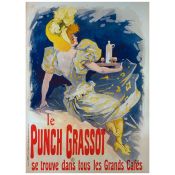