An acknowledged genius of the Renaissance period, Leonardo Da Vinci (1452-1519) was renowned in his own time and in later centuries as a painter, sculptor, architect, musician, engineer and scientist. He drew an amazing range of subjects, including flying machines, religious imagery, caricatures, and anatomical studies of people, animals, and plants.

During his busy life, Da Vinci worked as a consulting engineer on cathedrals, military engineer, teacher of mathematical theory, and architect, besides sculpting and painting some of the world's most famous works, such as the Madonna of the Rocks, The Last Supper, and the Mona Lisa. He continued with many varied scientific investigations in geology, botany, anatomy, hydraulics, and mechanics.

Add a touch of the Renaissance to your life with the framed art of Da Vinci.

SKETCH OF A HORSE 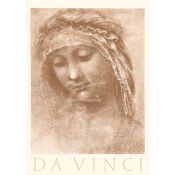 Angel (Detail from The Annunciation)

The Virgin and Child

The Last Supper (center panel only!)

The Last Supper (left panel only!)

The Last Supper (right panel only!)